Comic Book Wednesday: It's Not My Fault It's A Day Late...

A super-quick follow-up to last week's review of Batman 681:
Batman 682. I have absolutely no idea what's going on.


And on to the reviews proper...


Secret Invasion 8. By Brian Michael Bendis & Leinel Francis Yu. The final issue of Secret Invasion opens with the Watcher looking on as the Skrulls unleash their secret attack: a bio-weapon implanted in the Wasp. Usually, I don't have any complaints against Yu's art, but in this case, neither the art nor the dialogue really conveys what's going on. It looks like Janet van Dyne has accidently become the agent for a weapon that makes people come down with a bad case of black circles. The rest of the issue is basically a launch pad for the new status quo, which is the real problem here: the Skrulls seem more like an afterthought than the main story. It probably would have been more narratively focused (and more honest) if Marvel had just added a few more pages to SI 7, wrapped it up there, and published this issue as an epilogue or coda, which it very clearly is. It all fits together, as long as you don't think about it too closely, but for an eight month story, it's a fizzle of an ending.

Fell: Feral City. By Warren Ellis and Ben Templesmith. While I still regard Y the Last Man as far and away the best graphic novel series in my collection, Fell is probably the closest thing I have to a comic I'd described not only as literature, but as art. In fact, in a flagrant disregard for tradition and precedent, I'm going to start with my favorite part of the novel: the art. Generally, art is not a big selling point for me in a comic book series: I'm in it for the story, the dialogue, the script. For the most part, as long as the art isn't actually detrimental to the rest, I don't notice it.

I notice Fell's art. Take a look at this: 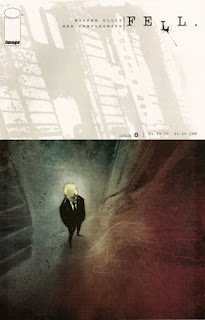 I really wish this image could do justice to Templeton's work. But to get the full experience, you really need to get your hands on the glossy paper. The exact lines and sketches are actually fairly simple--not quite minimalist, but lacking just enough detail so that you know it's an aethetic choice rather than, say, a bad artist. The brilliance is in the colouring though. Every panel is seeped in these incredible hues. Often, it seems like the characters themselves are giving off light--or failing to do so, in some cases. The end effect is an artistic marvel. Like if James Jean of the Fables covers decided to do whole books.

But enough amateur art critic. As pretty as Templeton's art is, it needs a story to ground it. In fact, I've read some of Templeton's other work, in which he illustrates more run-of-the-mill zombie stuff, and it's almost disappointing to have something so typical drawn so well. Like a waste of potential.

Thankfully, that's not the case here. Ellis is on his game, even if it's a different game than he usually plays. Each of the eight issues that make up volume one of Fell concern Rich Fell, a police detective transfered to Snowtown under inglorious, mysterious circumstances. And once in Snowtown, Fell begins to fall... presuming he started off from any height to begin with. As you'd imagine from the subtitle, Fell: Feral City is nearly as much about Snowtown as it is about Fell. Snowtown is a dark mirror image of a city: its people are controlled by superstition, hundreds of murders go unsolved each year, and everyone there seems to be going slowly--and not so slowly--insane. And that includes Fell. That's really the most fascinating part of the series--watching Fell slowly descend deeper and deeper into Snowtown, making one moral compromise after another. It's not exaggerating in the least to say that Snowtown is often a reflection of Fell's mind, growing darker and more warped along with him.
The little details are almost enjoyable as the big picture--like Fell's relationship with the bartender Mayko, and the comical insanity of Fell's fellow officers (Department secretary: "My husband left me. For the dog. That bitch. That pampered whore. With her fur and her pretty little nails. Aren't my nails pretty enough? Didn't I wear the suit for him? My throat is raw from the barking."). And the creepiness that is the Nixon Nun must be seen to be believed.
Ellis is big on promoting this series, although not always big at actually WRITING it: the issues are dirt cheap, but it's often a six month stretch between them. Issue ten will be out... some day, but for now, Feral City can be purchased for around $20 Canadian, which would be a good price even if the comics were crap. Instead, you'll be getting a fusion of art and story that fully showcases why the comic book is a worthy medium for the art of narration.
...And no, no one's paying me to sell Fell volumes.
Later Days.

Posted by Person of Consequence at 5:54 PM